Is There Hope With Glioblastoma Multiforme?

Anyone around my age, or perhaps anybody even younger than me would know who Jason Momoa is. Yes! He is this Hollywood star who portrayed the handsome, muscular, strong, and virile character of Aquaman. The blue eyed, bearded, blonde, long- and wavy-haired man with a deep voice whose superpower help defend the world. He is one of my favorite Justice League characters.

The oceans may get jealous of me because I cared for a patient who looked exactly like him. I have to admit that I could hardly fathom that this Jason Momoa doppleganger in front of me had a brain MRI that suggested, “Large Glioblastoma Multiforme measuring about 8 cm x 8 cm on the parietal-occipital lobe”. He was only 32 years old. This is a condition described as a malignant brain tumor that is known to have poor prognosis, being two years as the maximum rate of survival. Treatments vary from systemic pharmacologic therapy, tumor resection, radiation, and chemotherapy. When I further read his reports, the neurologist already deemed this situation late-stage that surgery will not be beneficial and that the only management of choice left is radiation. It was a disheartening visit to see the patient’s mother weep as she tells the story of how it all started with severe headaches and that one day, the patient just dropped unconscious on the floor.

For many years, I worked as a surgical nurse and I have assisted in so many brain surgeries. My connection or communication with brain surgery patients were so limited since they were always under anesthesia by the time I meet them. However, this experience was unique to me. As a nurse practitioner, I was able to provide primary care to the patient, referring him to specialists and ensuring that he is assessed, followed up on and cared both medically and holistically. This was also my first encounter of a Glioblastoma patient as an FNP. Lastly, I did not expect a young adult to be diagnosed with such a deadly disease at an early age.

Initially, I thought that I would still see the patient for a follow-up since I had to ensure that his arm thrombus was not worsening. I remember ordering a STAT ultrasound and never hearing back from the patient nor his mother. One day, I personally called the mother to check in. She stated that she could not get her son to cooperate for appointments anymore. He was becoming quickly disoriented. I have made multiple phone calls to mom and at times, she would visit me personally without her son just to show me photos. One day, she comes in and showed me pictures on her phone which appeared correlated to pulmonary embolism. I immediately advised her to call EMS to transport her son to the ER.

Devastation. One word to describe a Friday that I would never forget. I received a call from a mourning mother, crying her heart out to me. I inevitably cried too. This was 2 days after she brought the patient to the ER. She said that her son passed away a few hours ago, and that before she arranges his funeral, she thought of calling me to thank me. She expressed her deep gratitude towards me stating that she felt that I was the most empathetic provider that she has met. She said that she felt that the other providers who saw her son just dismissed them since the brain tumor was already terminal. The neurologist was also too careful to even prescribe any anticoagulant for the arm DVT since it was a very delicate situation that may cause more complications.

In my 15 years of nursing career, I have witnessed so many patients dying. The worst ones happened while attending to trauma cases, or when the heart surgeries fail. But this time, the pain really hit home. As a mother myself, I was listening to another mother grieving, crying and almost choking her sadness out. But you know what really hit me to my core? It was her gratitude. A strong woman who not only cares and loves her child so much but a lady who can stay grateful in times of darkness. I reckon that this is somewhat inappropriate to say since death is never a good occurrence, but she also made me feel deeply appreciated.

So, if you ask me the question, “Is there hope in Glioblastoma Multiforme”? My answer is medically speaking, it is a sad truth that most patients pass away rather rapidly after the diagnosis is given. Nevertheless, this medical condition has connected me to a special patient, whose mother showed me that hope, love, gratitude and courage are possible, even during our bleakest hours. 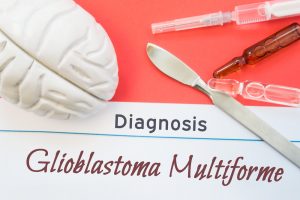